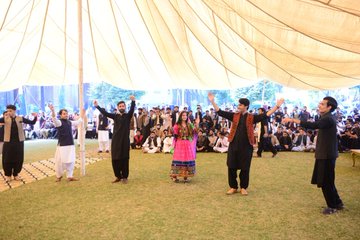 The event which was aimed at showing the soft image of Pakistan to the outer world was inaugurated by Vice Chancellor Prof. Dr. Asghar Zaidi.

The event which was aimed at showing the soft image of Pakistan to the outer world was inaugurated by Vice Chancellor Prof. Dr. Asghar Zaidi.

The Pashtun students played their traditional music instruments including rubab, wore their cultural dresses and performed Attan; their traditional dance. They also organized a peace walk at the campus named as Ravian Cultural Peace Walk.

Talking to the students, Prof. Zaidi said that the students should keep their cultural values alive. He also said that western culture is quite dominating in Pakistan because of the lack of opportunities to promote and propagate our indigenous culture.

He also announced that GCU would organize Pakistan Cultural Festival on March 23, 2021 to promote the cultures of all the provinces and areas of Pakistan.

He added that such cultural shows would definitely create a sense of cultural integrity among the youth of Pakistan.

Earlier, Pashtun students told Prof. Zaidi that a concept of wars and destruction was attached to the Pashtun inhabiting areas of Pakistan and the youth of this century wanted to change this notion by bringing the actual and just representation of the community to the front.