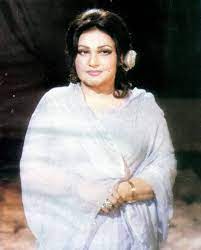 23rd December 2000 is the day on which we lost the heart beat of Pakistan Malak-e-Tarannum Noor Jahan!!

In the last three decades, the majority of our legendary classic singers like Malka-e- Tarannum Noor Jahan, Mehdi Hassan, Nusrat Fateh Ali Khan and then Reshma parted ways from us.

The silence of these voices has actually embarked the end of a golden classic era. Surely, the end of this era is, in reality, the revival of pop and retro style music in Pakistan.

It is quite interesting that today’s pop singers always draw their inspiration from these legendary classic singers. Undoubtedly, there was some magnetic power in those classic voices that drives us towards listening to their evergreen songs.

Malaka-e-Tarannum Noor Jahan; the melody Queen, the beautiful actress and a producer had those healing powers in her voice and, expression in her acting that no other being in any part of the world had ever been able to master!!

Noor Jahan was born on September 26, 1926 during the British Rule in a small city Kasur, situated in Punjab province. At the time of her birth, she was named as Allah Wasai by her hardworking parents.

From early age, this little melody princess showed her keen interest towards singing especially acting!! Being an offspring of a liberal family of professional musicians, she was allowed to take initial singing education from Ustad Bare Ghulam Ali Khan.

Noor Jahan’s fairy wish for acting came true when, in 1935 she was given an important child role in a hit Punjabi movie named as ‘Shiela Urf Pind di Kuri’.

Later, her simple beauty and flawless acting as a heroine in ‘Khandaan’ movie produced by Shaukat Huassain Rizvi made her a well-known actress in no time.

Working in ‘Khaandan’ was actually a turning point in her love life when she and Shaukat Hussain Rizvi fell in love with each other and got married.

It seemed that her husband used to produce every film by idealizing his beautiful wife in it!! Zeenat and Anmol Ghadi were some super hit movies of Noor Jahan produced by Shahkat Hussain Rizvi.

The famous Indian legend Dillip Kumar has always looked up to Madam Noor Jahan for guidance and inspiration, whose fame touched the heights of the sky after doing a blockbuster hit named as Jugnu with her in 1947.

Not only this, Noor Jahan got the golden chance to sing the very first Qawali of the subcontinent in female voice: ‘Aahen Na Bhareen Shikave Na Kiye’ with legendary classic vocalist Zohra Bai Ambalewali.

After giving many hit movies and songs the patriotic and noble Noor Jahan said good bye to the Indian industry in 1947 and migrated to Pakistan; her own homeland!!

Malka-e-Tarannum was not only the mother of a daughter Zil-e-Huma and two sons but the credit of being a mother of our film industry also goes to her.

Keeping in view the upcoming gigantic challenges which Pakistan was about to face, she, along with her husband, established a Shahnoor Studio on Multan road in Lahore in which all the early Pakistani movies were shot. Then started the glorious story of giving hits after hits like;

Malka-e- Tarannum sang thousands of songs both in Punjabi and Urdu languages till her death. She was the one and only singer in the history being able to sing Kalaam-e- Iqbal i.e. “har lehza ha momin ki nae aan nae shaan”.

Undoubtedly, her voice was exclusively made for the poetry of Parveen Shakir, Amjad Islam Amjad and Hassan Rizvi and she sang their poetic verses like flowing water.

Noor Jahan brought ‘eternal noor’ to this land when; during the war of 1965 with India she paid a tribute to the Pak Army soldiers by singing national songs. ‘Ae watan ke sajeele jawano, rang laye ga shaheedon ka lahoo and ae puttar hattan te nahi vikda’ etc are those evergreen milli naghmay that boosted up the morale of our military soldiers and they sacrificed their lives for the protection of their land.

Even today, all these milli nagmay are aired on our National Defense day on 6th September!!

One of the golden memories of her career is a program “Tarannum” on PTV in early 1980’s. Every year, PTV telecasts some episodes of the show on the death anniversary of Noor Jahan which makes most of us sob in the chilly December.

In fact, Sajjad Taffu; the leading professional guitarist and singer of Pakistan has shared his views about Madam i.e. “I consider myself the luckiest person on this earth to work with madam for 21 long years as a guitarist. She was like my mother who gave me the golden opportunity to work in the very first season of Tarranum program as a musician; from 1981 to 1983.”

“Noor Jahan was the bravest and the most loving lady I have ever met. My last song as a musician with her was ki dam da bharosa in film Sakhi Badshah which will always remain as a golden memory in my head till death”, said Sajjad.

He further said that there is a dire need to provide a platform to only those singers who have a singing background, rather than immature non professionals.

The legendary composer of Pakistan Mr. Zulfiqar Attray is that dark horse who has been taught by madam i.e. “Working under madam’s supervision has been the best time of my life.” says Zulfiqar sobbing.

He further said that she was a blue lady of this subcontinent who only preferred honest and hard working people. She was a woman of down-to-earth nature who used to do singing rehearsals till her death never considering her a perfect singer.

Today, there is a huge vacuum in the music industry. We actually don’t have those people who respect this honorable profession; said Zulfiqar in dismay.

To sum up, Noor Jahan was a blue lady who is among the most respected stars and intellectuals of Pakistan. What she used to carry became the eternal style….What she said used to be the point of view of the majority. Her crystal clear Urdu accent was her trademark in the intellectual community. Women have been and still, do idealize her matchless style!!

Today, there is a dire need to not only remember these legends but, we also need to follow their footsteps in order to be successful and bring laurels to our land. The evergreen legends like Noor Jahan are our heritage. We need to take care of what she gave us. Because;

“People part away but, it is their work which remains alive forever”