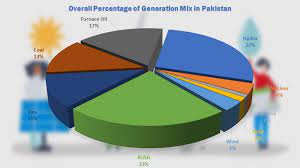 The world at large is aspiring to achieve faster economic growth in this century with an emphasis on renewable energy. Let’s hope, Pakistan’s energy cannot lag behind.

Pakistan – a land of great contrasts – is one of the world’s largest and fastest-growing middle classes. The macro-economy has been stable for over the last several years, however, to attract foreign investment and support, further economic growth, additional economic reforms and development of the energy sector are needed.

Pakistan’s energy mix is split among 64% thermal, 27% hydropower and 9% other renewable resources. According to the statistic breakup, the country’s installed capacity of hydropower plants is over 10,000 megawatts, about 8,500 megawatts of Liquefied Natural Gas, 6,400 megawatts furnace oil, about 5,000 megawatts local and imported coal, 4,245 megawatts Gas and only 3,444 megawatts from renewable energy resources.

Pakistan is blessed with a high potential of renewable energy resources but, so far, only large hydroelectric projects and few wind and solar projects have harnessed this potential. It is estimated that Pakistan has hydropower potential of more than 60,000 megawatts. Just over 10% of it has been utilized for the production of electricity and the remaining potential is still untapped.

To minimize the carbon emission and improve the energy mix, recent governments took physical steps and started the mega dam projects such as Diamer-Basha Dam, Mohmand Dam, Tarbela 5th Extension etc and some wind and solar projects. According to the government, 30% of its energy capacity will be generated from the renewable sources by year 2030.

With the development in growing renewable energy, cheaper electricity, greater energy security, reduction in carbon emissions, and saving up to $5 billion shall be available over the next 20 years. Pakistan has tremendous potential to generate solar and wind power. According to the World Bank, utilizing just 0.071 percent of the country’s area for solar photovoltaic (solar PV), power generation would meet Pakistan’s current electricity demand.

Wind is also an abundant resource. Pakistan has several well-known wind corridors and average wind speeds of 7.87 m/s in 10 percent of its windiest areas. However, despite a number of successful projects, the installed capacity of solar and wind energy in Pakistan, at just over 1,000 megawatts, is equal to around 2 percent of total generation.

The world at large is aspiring to achieve faster economic growth in this century with emphasis on renewable energy. Let’s hope, Pakistan cannot lag behind.

This article is contributed by Cheap Energy which can be reached at [email protected].

More about Qureshi for Palestinian