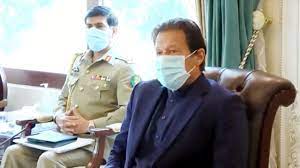 While presiding over the weekly meeting of NCCHCD in Islamabad, the prime minister said all the industries linked with the construction sector would be given full support from the government to uplift the economy of the country.

Prime Minister Imran Khan has asked the relevant authorities to facilitate the industries associated with the construction sector to keep the economy of the country alive.

While presiding over the weekly meeting of National Coordination Committee for Housing, Construction, and Development (NCCHCD) in Islamabad, he said that all the industries linked with the construction sector would be given full support from the government to uplift the economy of the country.

Commenting on the urban development, Imran Khan said that Islamabad was the only planned city in Pakistan but it was also getting deteriorated due to the eradication of green areas. He also said that the government would ensure to protect the green areas in Islamabad to keep the city in shape.

Governor State Bank told the meeting that the banks had achieved their quarterly targets of house loan facility and added that the banks were further asked to facilitate the consumers more in this regard.

Chairman Capital Development Authority (CDA) informed the meeting that the authority was speedily working on its mechanization to minimize the public visits.