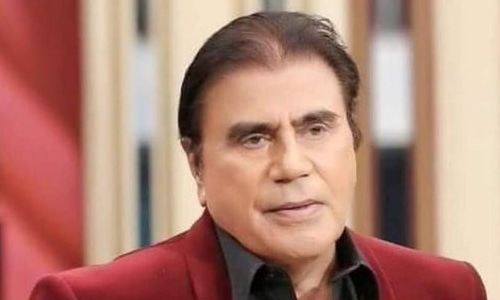 Dr Tariq Aziz was born in Jalandhar on April 28, 1936. After partition, his family migrated to Pakistan and settled in Sahiwal, where he received his primary education.

He started his career with Radio Pakistan in the 1960s and later went on to become Pakistan’s first television host.

His programme Neelam Ghar — later named Tariq Aziz Show — started in 1974 on Pakistan Television and continued for four decades. He was also a poet and an actor and performed in several radio and television programmes as well as in films.

His first film, Insaniyat, was released in 1967. Other notable titles he acted in include Salgirah, Qasam Us Waqt Ki, Katari and Har Gaya Insan.

For his services to the entertainment industry, he was awarded the prestigious Pride of Performance Award by the government in 1992.

Aziz dabbled in politics as well and was a member of the National Assembly from 1997-99.

As per the details, author of famous drama serial ‘Guest House’ he died on Thursday evening after fighting coronavirus for almost a month.

Dr Tariq Aziz, after contracting coronavirus, was on oxygen support for almost a month but due to severe breathing issue he was shifted to Jinnah Hospital on Wednesday night where he was put on ventilator.

His funeral prayer was held on Thursday at 11:00pm near his residence at Azam Garden Lahore. A large number of people attended his funerals and condoled with the bereaved family.

Dr Tariq Aziz was an educationist, playwright, violinist, director and a poet. During his professional academic career, he worked as a professor for various public and private sector colleges and universities in Pakistan. Currently, he was serving as Head of the Urdu Department at Lahore Leads University.