Theatre play of 1947 gets thunder ovation from audience 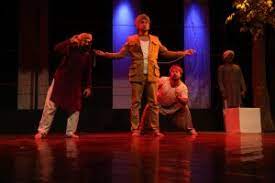 ‘Rishtiyan Da Ki Rukhiya Naa’ raises a hope that age-old ties cannot be severed in terms of language, literature, thought process and other aspects of our cultural heritage

LAHORE – Staff Report – The theatre play ‘Rishtiyan Da Ki Rukhiya Naa’ adapted from Toba Tek Singh – a short story by legendary Sadat Hassan Manto – is presented at Alhamra. The play is written by well-acclaimed playwright Dr Atamjit Singh while directed by Aamir Nawaz, who heads Maas Foundation.
Play thrilled Lahore audience and got thunder clap at the end of the performance. President and Director of this play, Aamir Nawaz added that it’s an achievement for Maas foundation that it is the first theatre company of Pakistan which has produced several theatre plays in all three major languages like English, Urdu and Punjabi along with nonverbal plays.

Dr Atamjit Singh didn’t visit Pakistan to be witness of the performance due to his commitments but he promised to visit whenever this play will be performed again by Maas Foundation in Pakistan. Although Maas Foundation has performed more than 10 countries in international theatre festivals but Lahore audience is unique, it always supports and love parallel theatre and performances, he added.
Music of this performance was composed by Atul Sharma from India and well-acclaimed music composer Sohail Rana while music designed by Imran Nawaz. Singers were Jagir Singh, Rajat Raj, Gurjinder Guri and Raza Heer and Kashif Nazir is the assistant director of the play. Cast includes Sarfraz Ansari, Zohaib Haider, Syed Zeeshan Haider, Hassan Raza, Tanveer Khalid, Usman Ali Chaudhry, Hifza Tahir, Ch Zaheer Taj, Imran Mani, Syed Hammad Ejaz, Kashif Nazir, Muhammad Usman Rehan, Ahmad Chaudhry and Afzal.
The ‘Rishtiyan Da Ki Rukhiya Naa’ is one of the major literary and theatrical works of Punjabi literature and theatre. Written in 1981 and first directed by the author himself, this play has been staged hundreds of times in India, Canada and America by more than 50 different groups in Punjabi, Hindi and Urdu. The play has also been published in all these languages and also in English. As part of the curriculum in various courses in different universities of India, this play is treated as a classic in the dramatic literature of Punjabi language.

Although the basic element of the plot is bifurcation of the forgotten inmates of a mental asylum after the cruel partition 1947 was over, yet the playwright like the story writer has been able to achieve a certain inwardness with which he often tends to approach both the individual/collective psyche of Punjabi community as also the sociology that rarefies or refracts it. Whether it is ‘Rishtiaan Da Ki Rakhiye Naa’ or his other plays, it’s always the complex web of personal/social/artistic relationships that constitutes the very stuff and material of his dramatic content and structure.
In this play he explores the sociology of fragmented relationships in the post-Partition scenario. Adding a few characters and creating their detailed characterization in the play, Atamjit has not only presented the pain, agony, turmoil and sufferings of ordinary Punjabis, he has also pitied the overall milieu that could not bear the brunt of this partition in any dignified manner. At individual level people remained concerned and helpful to each other but at the level of community the Punjabis who speak the same language did the most shameful acts that are unparalleled in more ways than one in the history of mankind.
The play and its songs mourn the events of 1947 in a most dramatic and subtle manner. But it also raises a hope, especially through end of the play, that the age-old ties cannot be severed in terms of language, literature, thought process and other aspects of our cultural heritage.