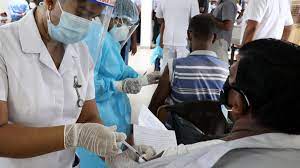 Economic Coordination Committee (ECC) has sanctioned a grant of 150 million dollars to buy the vaccine for COVID-19.

The vaccine was approved in the ECC’s meeting presided by Finance and Revenue Adviser Dr Abdul Hafeez Shaikh in Islamabad on Friday.

It was discussed in the meeting that the amount of vaccine being imported would fulfill the need of 5% of the neediest people which are health workers and the people above 65.

It was told in the meeting that at least 10 million people would be vaccinated with the help of the vaccine being imported.

The ECC also asked the Ministry of National Health Services to talk over the plan with World Bank and other donors while coordinating with Economic Affairs Division to get some assistance in the import of the vaccine.

In the meeting, it was decided to ask the Ministry of National Health Services to develop a proposal about the price negotiation and to avoid any kind of risk in the purchase of the vaccine as it was being imported on a bigger scale.

Economic Affairs Division’s request to avail the G-20 debt relief was also approved for the period of January-June 2021.

ECC also sanctioned two technical additional grants for “Initiating the Process of Retrenchment of Pakistan Steel Mills Employees for an amount over 19.6 billion and Prime Minister’s Special Package to Implement SKILLS FOR ALL Strategy as Catalyst for TVET Sector Development in Pakistan for rupees 500 million.

The meeting also approved above rupees 689 million as budget re-appropriation for National Information Technology Board for fulfilling its various needs.