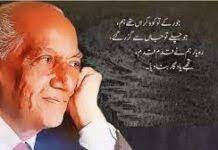 Pakistan has always suffered from an identity crisis. While it was supposed to be secular and liberal as envisioned by its founder, the country soon slipped into the grip of religious groups, which have although not been in direct government or power, but hold a significant saying in the social and cultural life of the country. While the liberal class of the country remains divided due to many issues and has never had political clout in the country, some liberals have made their unique place and are remembered even today. As the 30th death anniversary of renowned poet, writer and revolutionary Faiz Ahmed Faiz is commemorated this November, I would like to show a new identity associated with the celebrated Marxist.

As local liberals remain divided on whether to become socialists or capitalists, they have really forgotten the divide between left-wing and right-wing. Just being a socialist or communist doesn’t make you a liberal, as the communists, demolished after the fall of the Soviet Union or the “Evil Empire” and the Berlin Wall, were certainly not liberals. Trying to free people from all kinds of barriers does make you a liberal in real sense. Yes, one can be a liberal and socialist at the same time but just being socialist isn’t enough at all. As Pakistan started suffering from an identity crisis just one year after Jinnah’s death, Faiz did try to put up some resistance against it. Faiz, along with two other prominent communists, had founded the Communist Party of Pakistan in 1947 and found support from poor farmers and labourers of the country, who associated themselves with the party’s message. The Communists were not happy over Liaqat’s decision to Islamise Pakistan in contrast to Jinnah’s secular vision. On the other hand, Liaqat was also looking for a confrontation with the communists. After snubbing a Soviet request to visit Moscow, he went to Washington DC and returned with a clear message. Crush communists in Pakistan. The US was worried about spread of communism in Asia and reportedly asked Liaqat to use the Islamic card to ban communists in his country, as poor economic conditions in third world countries were rapidly providing the place for communism to breed in these countries. The party remains banned until now.

The Muslim League, which had founded Pakistan, was getting dysfunctional after Jinnah’s death and it was looking like that the Communist Party would greatly benefit from the Muslim League’s weak position, particularly in Punjab. However, that never happened. Maybe, the government was too frightened of the popularity of Faiz and his supporters. Awarding the Lenin Peace Prize to Faiz was seen as an attempt to bridge the gap between the Soviet Union and Pakistan but Islamabad at that time was busy fighting America’s proxy war in Afghanistan. Faiz remained pro-Soviet until his demise but his political standing was cut short by the lifetime ban on the Communist Party. He was often called “Our Poet” by the Soviet Union but Faiz never chose to make Moscow as his permanent base and returned to Pakistan as soon as he could just some years before his death. Although, he knew that Pakistan could never fulfill all his goals and objectives, but he never chose to abandon his homeland, which he could have easily done if he was to achieve global standing forever. Faiz always wished for a communist revolution in Pakistan but couldn’t achieve it. He proved to be a liberal unfit in a country, which is deeply orthodox in its cultural and political thinking.

How can local socialists and communists learn from Faiz and become a strong force in the country. Well first of all, being a socialist and communist is too old-fashioned for today’s time. There may be some people like this around the world but they don’t like to identify themselves as communists anymore. The US Democratic Party might follow socialist policies but it never identifies itself as a socialist party. Local socialists love to abuse the US although the Democrats are socialists themselves. Local socialists are divided and lack a clear vision. They are stuck in Soviet times and hardly have any worth-selling idea for today or most probably tomorrow.

They lack the money and the intellect to identify with voters and solve their problems. They are undisciplined and headed towards doomsday. These socialists don’t have a clear leader to lead them and lack the speaking power to identify with people and understand what they think of them. These communists just like to dance to tunes of poetry of Baba Fareed, Faiz and others but can’t bring out any concrete strategy or policy like these poets brought. They love to wine and dine but that trashes their professional lives more than fulfilling their personal desires. If they want to give relevance to what Faiz wanted to do, they should stop identifying themselves as socialists and communists and just label themselves as liberals. But becoming liberals is also something which is far-off for these people. Liberals take concrete action and do something meaningful instead of just holding small meetings like these people do.

They need another Faiz to make them relevant but that seems nearly impossible in days to come as only talking is very easy but taking action is very difficult.