Govt not to make lockdown even stricter: Asad Umar 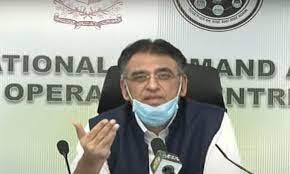 Planning & Development Minister Asad Umar has made it clear that the government is not going to increase the stricter lockdown in the country.

While talking to a private news channel, he said the third wave of coronavirus was very deadly and it was spreading at a fast pace.

He added that everybody should adhere to the standard operating procedures (SOPs) to stay safe in this situation.

Addressing a press conference after a meeting of the National Command and Operation Centre (NCOC), he said the government took “targeted and staggered” decisions to curb the virus’s spread after much thought and deliberation in order to minimise the impact on the poor sections.

He added that people’s livelihoods needed to be taken care of as well as their health.

Describing the current Covid-19 situation, he said the virus had spread rapidly in the past week, with cases, positivity ratio and hospitalisations all witnessing a spike.

According to the minister, the latest decisions taken with the permission of Prime Minister Imran Khan would include:

He, however, said that the government was not going impose more restrictions to make the stricter lockdown more intense.

He also said that the government was going to buy six ton oxygen and 5,000 cylinders more to meet the requirements of the hospitals.

The minister said that the government had vaccinated 140,000 citizens on Saturday and the target of the government was to take this number to 300,000 people on daily basis.

He further said that almost 100 million people benefit from the free vaccination in Pakistan as it was the duty of the government to save the lives of its citizens.