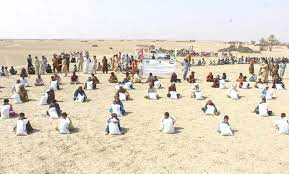 With the support of Hobara Foundation International Pakistan, flour was distributed among the beneficiaries in remote areas of Punjab, Sindh and Balochistan during the holy month of Ramadan.

Poverty reduction has always been an important objective for the ADB and the Bank’s Poverty
Reduction Strategy, approved in November 1999, articulated poverty reduction as ADB’s
overarching goal. In 2000, work on the poverty analysis for Pakistan was initiated as part of the
process of developing the new Country Strategy and Program. This report describes the trends and
key features of poverty in Pakistan, discusses its main causes, outlines existing programs and
initiatives to reduce poverty, and gives a set of strategic options for ADB.
A draft of this report was discussed at a high-level forum by representatives of the
Government, private sector, civil society, and international development agencies in April 2001.
The poverty analysis provides the basis for ADB’s Country Strategy and Program for Pakistan for
the period 2002 to 2006, approved in May 2002. The key findings of the poverty analysis and the
discussions during the high-level forum and subsequent consultations are the basis of a partnership
agreement between the Government of Pakistan and ADB. The agreement will formalize a
sustainable partnership that sets out a long term-vision and agreed targets and strategies for poverty
reduction.

As per details, bags of 20kg flour were distributed among the locals of Rajanpur, Rojhan and Rahim Yar Khan in Punjab, Washik, Kashmore and Kharan in Balochistan and Ghotki in Sindh.

According to the this, the process of flour distribution began in 2003 and is distributed every year. The purpose of these activities is to assist the low-income people in far-off areas. The locals of distant areas are also assisted in availing the facilities of clean drinking water, health and education.

The organization is also working on several other public welfare projects.