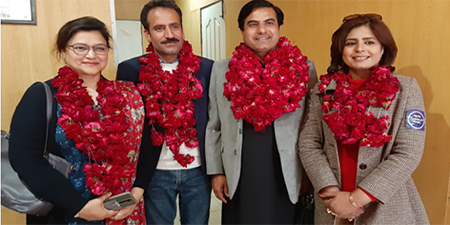 Journalists Unity Panel on Wednesday won Punjab Union of Journalists’ (PUJ) elections in a clean sweep here in Lahore; securing the seats of president and general secretary for another one-year term.

Saeed Akhtar was the chairman of the election committee while Hussain Kashif, Akram Zya, Makhdoom Bilal Amir and Shabbir Mughal performed their duties as member of the committee.

The committee announced the final results of the elections in a ceremony arranged at the Lahore Press Club. Out of the total 589 votes, Journalist Unity Panel’s Qamar uz Zaman Bhatti got 328 votes to be elected as the president while his competitor Ibrahim Lucky from Journalists Friends Panel got 241 votes.

For the seat of vice president, Journalist Unity Panel’s Muhammad Babar won with 226 votes while his competitor Qasim Raza from Journalists Friends Panel got 225 votes.

For the seat of general secretary, Journalist Unity Panel’s Khawaja Aftab remained successful for the second consecutive year with 331 votes while his competitor Badar Zahoor Chishti from Journalists Friends Panel got 215 votes.

After the announcements, newly elected President Qamar uz Zaman Bhatti said that his panel would keep on fighting for the rights of the journalist community at every forum.

Lahore Press Club President Arshad Ansari said that we should remove all the fractions in the journalist community to secure the rights of the professional journalists.