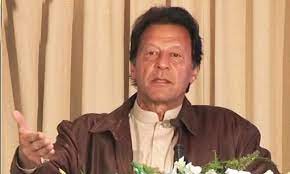 Prime Minister Imran Khan has said that his vision about Pakistan is to make it a welfare state.

According to the details, the prime minister was giving interview to a private news channel when he said that there was no issue in changing the policies to get the desired results.

Talking about the elections held in 2018, he said that, according to the facts and figures, 2018 general elections were far more transparent than the ones held in 2013.

He also said that, just like PPP founder Zulfiqar Ali Bhutto, he had also been through long political struggle.

Commenting on the cases filed against PPP and PML-N, he said that he was not the one who initiated these cases rather all these cases were registered before his taking the charge. He added that his government had filed only one case of money laundering so far and that was against former Punajb CM Shehbaz Sharif

His government had let the institutions make independent decisions, he said adding that there was no interference of government in the matters of National Accountability Bureau (NAB).

He said that anybody who looted the country would be made accountable. He also said that the opposition parties tried to influence him and blackmailed him to get the NRO.