Rain & thunderstorm: Lahore not giving a warm welcome to Eid 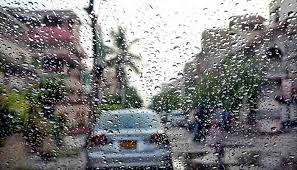 Weather in Lahore goes pleasant after sudden Rain and thunderstorm.

After a heat wave of almost two weeks, all parts of the metropolitan city are having Rain and thunderstorm.

KARACHI/LAHORE/ISLAMABAD: Major cities of Pakistan, including Karachi, Lahore and Islamabad, received the first spell of monsoon rain today, with citizens complaining of power breakdowns and water logging on the roads that affected daily routine.

According to the Pakistan Meteorological Department (PMD), strong monsoon currents from the Bay of Bengal have reached upper parts of the country, causing rains that will continue for a few days.

Meanwhile, the National Disaster Management Authority has also issued an advisory saying there is a likelihood of urban flooding due to heavy rains in Rawalpindi, Lahore, Gujranwala, Peshawar and Faisalabad today and tomorrow.

This rainfall is being welcomed by the Lahoris who were actually waiting for the weather to be pleasant during Eid days.

Lahoris are also expressing their happiness on different social media forums calling this rainfall a “taaza haw aka jhonka before Eid”.

More about Fresh wave of insurgency in Balochistan