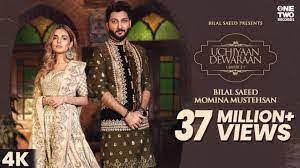 The description of the song at YouTubetells that don’t let your insecurities ruin your relationship as sometimes your eyes don’t see the truth.

Bilal Saeed and Momina Mustehsan ventured for a song Baari in November 2019 and the song became a big it soon after its release. Released by One Two Records, the song has got above 91 million views on YouTube so far.

After a year of Baari’s release, Bilal and Momina joined hands again for Uchiyaan Dewaraan (Baari 2) that is a beautiful sequel to Baari song.

The song is sung on the same tune with Baari’s sequential lyrics. The plot of the video revolves around a misunderstanding as Momina takes Bilal’s presence with a girl some other way and gets angry.

After she finds that girl marrying some other guy not Bilal, she goes happy and sings happy lyrics.

The description of the song at YouTube also tells that don’t let your insecurities ruin your relationship as sometimes your eyes don’t see the truth.

The song is filmed at the old buildings of Lahore city showing the life of a Lahori couple in somewhat conservative settings.

To talk of the outfits and looks of both the singers/actors, Bilal and Momina wore beautiful dresses according to the need of the situations.

The rooftop scene seems inspired from Shah Rukh Khan and Kajol starrer hit movie Dilwalay Dulhanya Le Jaaenge where the couple meets at the roof of the wedding house.

Fans as well as critics have loved the song. Viewers have termed the song a beautiful sequel to the original Baari song. A viewer commented under the song on YouTube that original Baari was a story while the Baari 2 is an after story.