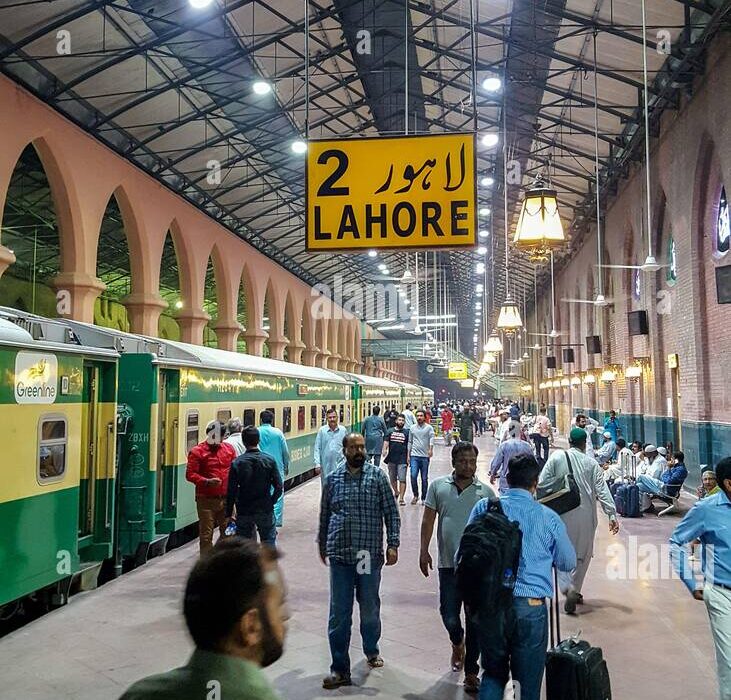 When you reach the Lahore (Pakistan) Railway Station an hour or so before your desired train enters the Platform, perched on a lonely bench, your presence turns into a lively fun. One can see a busy activity that keeps you mentally occupied. And in a relaxed mood, the only eating luxury could be a hot cup of tea and sugary biscuits that add to the joy of slow sipping.

No doubt, a fairly warm drink, goads your fixed thoughts into an expedition where you would remain busy, giving you an emotional and mental occupation for at least some time—a business indeed that makes you realize the ever- changing physiognomy of life.

At a railway station, a busy place like Lahore, the schedule of trains sometimes changes so fast that they act as a catalyst drawing in new passengers, cargo and the business done thereof. Sometimes, even lonely engines are seen at a cruise from line to line and track to track and along with passengers who wish to have caught their trains effortlessly.

How men, women, children and railway personnel that run around, create a situation worth-watching. No doubt, the onslaught of such rushy situations would whisk away the likelihood of being all by oneself. So, as a result, your boredom ends immediately. However, one can presume that Lahore Railway Station is a place that could make your depression dispelled as so many psychologically disturbed visitors come and go just to play down their monotony.

The constant slow sipping and sitting however has showered on me a rare mood of creative sensibility. My eyes will not stay long on one phenomenon. The moving trains, in so many ways, can throw a person in a pensive mood when they leave their stationary track for their destinations. The impression one gathers is that perhaps the train or its passengers will not come back again. But it could be a wrong supposition all the same. Anyway, both the departing passengers and the ones who have come to say goodbye may throw one in a thoughtful mood. All these dual situations give Lahore an altogether different character. If anything makes Lahore heart of Pakistan, it’s not its physical centeredness but of its being a focal point that attracts Pakistanis for various reasons as the cosmic sun does to other planets.

While for a few moments, as you get free of inner distractions, you may observe activities all around. There was still time for my much awaited train to arrive. A group of young girls enthusiasts seen coming towards me. They were fashionably dressed but each was holding an Android cell phone. Some of them were making their photos; others were busy making selfies; while the rest were making movies and pictures of the station of rare reputation.

I thought that Lahore Station could be a site for the young girls who feel a lot of attraction and fascination. They considered it good to preserve the moments here and the pictures of moving trains and engines who wander here and there on empty tracks. But nothing was pointless.

The girls keen on making selfies, drew my attention to an important fact of life– I inferred that making pictures or selfies perhaps doesn’t have to do with what life is made up of. The important thing on which they should have focused was to buying tickets, taking care of their luggage, and sitting and waiting for their train. The question arose, was life all about what these girls were after; or is it just taking care of what is necessary? I had learned that those who took interest even in minor things, were not either warped or peripheral. Just worrying about bread and butter doesn’t make essentials of our living.

My drinking of tea was going on though there were timely interruptions caused by distractions from outside. The laborers were perhaps as laboriously busy as anybody could claim. The wrinkles on their faces were more in number than the rupees they had earned for the day. They were the real Beasts of Burden who were promised a better life by the every government that came to rule. The house of cards couldn’t give them shelter made of brick and mortar.

As I was cogitating on the issue, I looked upward at a tall Peepal Tree (a kind of tree) whose thin leaves were stirring fast by the lighter breeze that portended a change in weather soon. When my thoughts riveted on the sorry plight of these Coolies, who like the lonely engines that were at a slower pace, moving from one track to the other, showing their timely presence as players do before they get into some combat. It was noted that majority of trains were hopelessly late. Their fate didn’t look different from that of the coolies.

Later on, I saw a group of Coolies gathered close by a tea stall. Meanwhile, the Khokha Wala was mumbling some words to himself. The dim inaudible voice was, like soaring Dollar anticipating a flood of price hike that would make life a bit more difficult for the poor wage-earners discomfited, all the Coolies pushed their carts and disappeared in the dark. Perhaps the Khokha Walla wanted to raise the price of a cup of tea and the Coolies were a bit annoyed over the price. Also, there was news that the next time there would be an increase in railway fares.

As I was gulping down comforting tea sips, my eyes suddenly caught the view of bad condition of the historical railway building. It, no longer presents the old immaculate site that once ruled the entire area. The dirty and filthy environment didn’t suit a city as marvelous as Lahore.

The beleaguered passengers waited and waited for their desired trains, lying and sitting on the floor and their luggage presented a look of those ill-fated independence migrants who were homeless, and scattered here and there on the ground without food and with little protection. The plight of the railway coolies, railway station and the prostrate passengers present such a sorry view to the eager eye of a 21st century traveler.

Now the day started presenting a black and white picture. Some pleasant visuals jerked me out of the worries of the day. In these ruminations, unthinkingly I found my cup had finished to the dregs. In the meantime, all around the night had started to overlap, seeing my train ambling at a distance, I collected my belongings. I groped for my tickets in my pocket, took my bag and got ready to enter the Lower AC Compartment. I slowly climbed upward steps of the compartment, the Khokha Wala had played a beautiful Indian song sung by Lata Mangashker:

The night is on the decline and Moon will hide itself soon;