An overview of emerging water crises in Pakistan
Blogs

An overview of emerging water crises in Pakistan 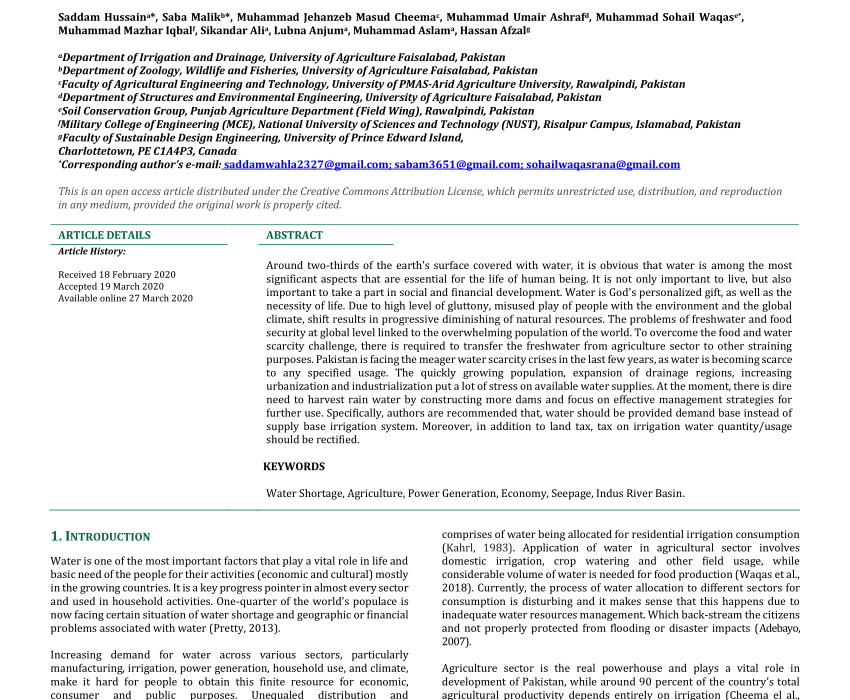 Water crisis in Pakistan is creating an alarming situation due to the shortage of water nowadays. Ironically, we are failed to store the water because of negligible number of dams.

Water is a basic necessity of human beings, animals and plants; a human can survive only three to four days without water. As per a recent report, Pakistan is the 3rd most effected country with a critical shortage of water.

Water crisis in Pakistan is creating an alarming situation due to the shortage of water nowadays. Ironically, we are failed to store the water because of negligible number of dams. There are also reports published that Pakistan will have a drastic problem of water in the coming years. It is also reported that it might become the most water stressed country with high chances to face retrogression.

Pakistan has failed to construct district-wise dams to store the rainfall water. This issue needs to be addressed on urgent basis by constructing dams without further delay; otherwise, it will cause utter scarcity of water. At the very same time, our agriculture is depending upon water and 95% people use fresh water for irrigation that is the huge ratio.

In fact, Pakistan is facing a water war due to different reasons. Water scarcity in Pakistan shows as if tour water resources are being stolen. However, per capita availability of water is declined due to population explosion and the mismanagement of water resources further adds fuel to fire.

Domestic wastage of water shall not be disregarded as one of the reasons of water shortage. People open tap in the kitchen or to brush their teeth and forget to close. People wash their vehicle with drinkable water at homes breaching the law. Farmers even utilize flooding system to water their fields which wastes the water. Sometimes, drinkable water is also used to clean clothes and utensils that causes the shortage of clean and fresh water. Water is also wasted in terms of outflow through muddy canals which are not yet cemented to save water.

Now, let’s discuss the wastage of water at government level. No major development has been made in terms of dams after Mangla and Tarbela, due to which, storage capacity has not been increased and water is ultimately wasted.

Location of dams is another issue which leads to the failure of dams. No proper legislation has been made to save the water rather implementation of the existing policies is also not observed. Water is wasted in Pakistan due to lack of storage capacity, lack of planning, mismanagement and political will as some forces and political parties play provincial card for their own benefits.

Pakistan stores less water from the available water surface flows due to the lack of sufficient storage capacity. Pakistan merely preserves water for 30 days as per IRSA report and a huge amount of water is tossed in Arabian Sea rather than being stored in dams.

Remedies to resolve this issue:

Integrated approach towards this problem and construction of more dams. Supply and demand management of water and water conservation at domestic level.

5) Water policy and its implementation taking all the stakeholders on board and avoiding politics over water.

These are the factors which affect agriculture, economy and health of the people causing unemployment and domestic issues. In the meanwhile, remedies are identified to resolve the issue.

There is a dire need of well-organized management of water resources and institutional planning. Firstly, traditional irrigation system should be replaced with the modern irrigation system. We can spread awareness nationwide by running different campaigns.

We can tell people that increasing population is putting stress on the available water and its consumption. Also, that construction of new dams is essential in order to resolve this issue on immediate basis. Pakistan is already facing many issues; the major issue is economy which is unstable.

However, it is a pre-requisite to save the water by increasing the storage capacity. Slight efforts on the part of individuals may save a huge proportion of water. Thus, individual efforts may surely bring big changes in our attitude towards saving water. One should start from oneself.

Avinash Advani is an independent researcher, author, educationalist, blogger and philanthropist. Currently, he is associated with social sector and promoting education in rural areas. He has also publications in different journals across the world.