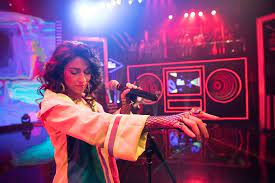 Celebrity singer Meesha Shafi’s latest cover of Nazia Hassan’s Boom Boom song is topping the charts while getting appreciation from across the border as well.

VELO Sound Station, launched on November 5, 2020, has recorded the famous cover of Nazia Hassan’s Boom Boom in Meesha Shafi’s voice. The song which was released on YouTube on December 5 has got 4,533,596 views so far.

As per the reviews and comments of the viewers, the song has not only attracted the Pakistani viewers but also audiences from the neighbouring country India.

From November 20 to December 5, VELO Sound Station has recorded nine songs in total.

Boom Boom by Meesha Shafi is the latest song of VELO Sound Station 2020 and is getting public applause not only from Pakistan but India also.

Karan Singh commented under the BOOM BOOM video on YouTube, “Love from India… No one can match Nazia but Meesha has done an impeccable job.”

Mahesh Kumar commented, “Here you go to the new era of music! Nailed it Meesha. Way better than any remake of boom boom heard! Addition to my car playlist.”

Aditya commented, “A song that will never get old. I don’t think it’s live singing but surely no one else could sing this song better than Meesha in current era.”

Bhupinder Singh commented, “I was listening to this song few weeks ago and was very nostalgic. Suddenly, there’s a new cover for this song which is equally more beautiful. Love from India.”

Rajeshwar Kewalramani commented, “Not a fan of remakes, but when i heard this, just one word came in my mind and that was AMAZING. You guys did justice to this evergreen song. Great lyrics with awesome music.”