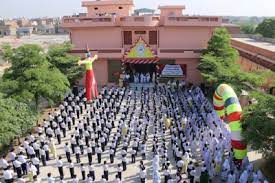 A cruel act of religion-based discrimination by the government has brought about yet another issue in the limelight, this time, victim being the Christian community of Pakistan. The issue spread like a wildfire in the jungle and is surfacing all over in the newspapers and blogs. The discrimination and setback faced by the poor Christian students of New Covenant School System is the grist for gossip mill and a crucial issue nowadays.

The agitprop and negative moves against the Christian community of Dawood Colony, Faislabad inclusive of the students who were enrolled at the New Covenant School System started when the first building of NCSS for boys was completed.

A clan of the local people used WASA against the poor and innocent students of the NCSS by initiating the construction of an unlawful disposal station of effluent waste water alongside the New Covenant School, Faisalabad.

The state administered WASA Faisalabad continued to keep the NCSS school and local Christian community on target by manipulating the environmental issues. The main reason behind this was to disrupt and put the state-of-the-art and purpose-driven buildings of New Covenant School System to bits.

The aforementioned disposal station is an uninterrupted origin of false smell and annoyance. Heavy duty generators are installed to run the station that are causing noise pollution constantly. The noise level recorded outside the generator room, inside classroom of the school and inside principal’s room is 82db, 57db and 57db respectively while the extreme side of the recommended level is just 55db. The said station has already taken a valuable human life when an innocent labor lost his life at the hands of a deep well by falling in it accidentally.

In addition, after the construction of the abovementioned disposal station, the locals in the vicinity of this station and the students of the said school reported to be mistreated by the state representatives as if they are not human beings.

After the elongated dispute between both the parties, the battle has been settled down to a point by the Director General, Environmental Protection Agency Punjab as he has nullified the approval of the Environment Department by the virtue of environmental conditions having a deleterious impact on the health of the students and neighboring locals.

Regardless of the termination of the Environment Department’s approval, the WASA officials seem to be stuck with their decision of running the waste water disposal station in spite of the orders of taking it down passed by DG Environment Punjab on February, 19th 2021.

The founder and chairperson of the New Covenant School has said that he is committed to deliver justice to his people. He has also said that he will not care about any obstacles put in his way and that he will continue his struggle for the achievement of the best environment for studies as it is the right of the children. He has further stated that he will leave no stone unturned during the journey of earning justice for the students of NCSS and the people of Dawood Colony.