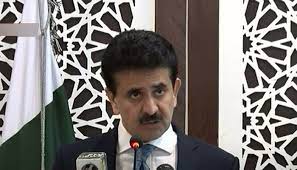 Foreign Office Spokesperson Zahid Hafeez Chaudhri said on Tuesday that Pakistan would keep on showing the real face of India to the world and would not allow India to mislead the world with its false propaganda.

Zahid Hafeez Chaudhri termed the briefing by Indian Ministry of External Affairs as an attempt to playfully involve Pakistan in any planned activity in the Indian Illegally Occupied Kashmir (IIOK).

He said this while talking to the journalists about a briefing at the Indian Ministry of External Affairs to foreign representatives on the alleged terrorist attack in the IIOJK’s Nagrota district.

He said that Indian government was busy in running anti-Pakistan campaign by establishing a false narrative against Pakistan after Pakistan had presented a dossier containing convincing evidence against India regarding its active involvement in different terrorist activities.

He also said that groundless and unproven accusations were just an exaggerated effort from India to reclaim its fabricated perspective against Pakistan and to distract the international community from its atrocities in the IIOJK and terrorist activities in Pakistan.

The spokesperson further said that Pakistan had been telling the world community that India could implicate Pakistan in any false and fabricated attack endangering the regional peace.

He urged United Nations and International Community to act on the dossier tabled by Pakistan regarding undeniable facts about Indian state-sponsored terrorism in Pakistan.