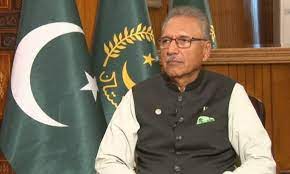 President Dr Arif Alvi said on Wednesday that impartial circulation of resources was important to eliminate socio-economic corruption adding that Pakistan was moving in the right direction to end elitism in the sectors of health and education.

Talking at Institute of Cost and Management Accountants (ICMA) Pakistan’s convocation ceremony, the president said that it was the responsibility of the state to rotate the resources for the good of the public at large.

He further said that majority of the people were pushed into the financial miseries just because of the accumulation of wealth in the hands of a limited class.

He asked the corporate sector to devise policies according to the concept of socio-economic welfare instead of going for manipulative dogmas.

He said that the provision of education and knowledge should be to everyone especially to the poor class instead of restricting knowledge to the elite class which could afford higher costs of education.

He also said that the outbreak of coronavirus had proved the importance of information and technology by shifting the process of education to the online module.

He said that it was the duty of the fresh graduates to pay back for the efforts of their teachers and parents by implying their knowledge and skills in the practical field.

About COVID-19 situation in the country, he said that the way the whole nation responded to this epidemic was appreciable.

He also advised the nation to keep following the Standard Operating Procedures (SOPs) as it was the only way to be safe from the COVID-19 epidemic.