World Diabetes Day: Unite to fight against the mother disease 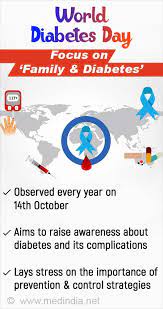 It is said that heavy man power; if utilised in an appropriate manner can bring eternal prosperity to a State as a ‘nation’.

But, if this population keeps on increasing without any family planning and, it’s grooming for expertise after wards. It becomes a heavy burden on a State. At this stage this burden can only be lightened by natural disasters, bomb blasts, and malignant diseases or due to the unavailability of food to this flux of illiterate population…

Sadly! When I turn around, I see the same pitiable phenomenon, being described in the above scribbled lines!!

Yes! The hardworking, but less groomed Pakistanis are dying out of hunger, natural and man-made disasters and above all, due to a long list of life time ‘static’ disorders. And diabetes is at the top of that list i.e. a chronic disease that occurs when our pancreas stops producing insulin, or does not produce enough insulin to transform glucose into energy after it reaches from the blood stream into the cells to produce energy….

There are three major types of diabetes:

Sadly! All of the above 3 forms are found here in considerable ratio especially in the Punjab province.

Examining the health conditions, not only in Pakistan but all around the world United Nations passed a resolution in year 2006 to declare 14th November as an International “World Diabetes day” and as a remembrance of the birthday of a man of words Fredrick Banting ; the co-father of insulin that fights against ‘severe diabetes’.

Being a member of United Nations and a 10th State having the highest ratio of diabetes according to an International survey, it is our responsibility to ‘unite on national platform to fight against this disorder.

As some of our local organizations are already struggling hard to educate the people about the causes, effects, stages and complications of this incurable but, controllable disease. However, there is still a dire need for unity against diabetes on macro as well as micro level.

In this regard, some of our responsible fellows unite on 14th November every year in small groups especially in the educational and health institutions as well as on the government level and arrange outdoor and indoor awareness activities:

The outdoor activities are tiresome but more effective as they include door to door awareness campaigns or different exhibitions where the people are educated to prevent or, to better fight with it by effective precautionary measures.

Not only this, people are reinforced to adopt healthy dietary and exercise habits along with their free and safe ‘diabetes diagnosis test’ commonly known as sugar test. Even sports events are organized for adults and children to get into those ‘life patterns’ that naturally minimize the possibility of having diabetes.

Indoor activities include ‘awareness based’ conferences on commercial level whereas lecture and activity based workshops in educational institutes.

But! These struggles on this special day are not enough to minimize the ratio of diabetes from 18 crore population. We need to work more hard, not only on World Diabetes Day, but consistently for years and years as an ‘army’ to fight against this monstrous disease.

Yes! With unity, strength and discipline we defeated polio. Then why not diabetes!!

For this; we, as a nation are required to make the diabetics and the people with the probability of diabetes believe that:

“Life is not over because you have diabetes. Make the most of what you have, be grateful” Dale Evans