All highways in Pakistan are open now: Fawad
Featured National

All highways in Pakistan are open now: Fawad 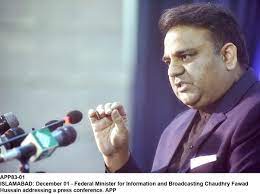 Federal Minister Chaudhry Fawad Hussain has said that there are no blockades on all the important roads of the country now.

In a tweet on Wednesday, he said that traffic flow on all the big highways of the country was smooth and all the blockades were removed.

He also wrote that different opinions are welcomed in democracy but nobody can blackmail the government.

He further wrote that whosoever is involved in the torturing of policemen would be punished.

Chaudhry Fawad Hussain wrote that personnel in uniform are the pride of nation and every citizen is bound to give them respect. Those who violated this rule were criminals, he added.