International Quds Day and the liberation of Palestine
Blogs Featured

International Quds Day and the liberation of Palestine 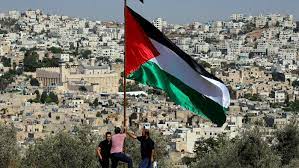 On 7th August 1979, the late Ayatollah Khomeini said: “I call on all Muslims and Muslim governments to unite in order to get the hands of this occupier (Israel) and its supporters off Palestine and call on all Muslims around the world to name the last Friday of Ramadan month as the ‘Quds day’ and declare the international solidarity of Muslims in supporting legal rights of (Palestinian) Muslims.” This day represents the global support for the Palestinians as well as other oppressed people.

Zionism, as a movement, was developed in the late 1800s to unite Jews and resulted in the forceful creation of an illegal and illegitimate state of Israel in place of Palestine; then occupied by only 5% of Jewish inhabitants, after World War II, promulgated and recognized by Western powers in 1948.

Nine centuries ago, while Christian Crusaders were burning Jerusalem’s Jews alive in their synagogue, it was the Muslim Saladin who kindly brought back Jews to Jerusalem and settles them along with the Muslim majority of the region. And 800 years later, this was how the Muslims were paid back for their past kindness to the Jews within the UN headquarters in Flushing Meadow, New York.

America was the main negotiator and chief architect of all road maps regarding the domination of Palestinians by Israel or what others ignorantly refer to as incessant Middle East conflict. The most important questions arising now are: “Were there any tangible achievements made in the over seven decades of peace talks? Is there any hope for the future of Palestinians?

The other side of the conflict reveals the gainful arms trade for American and other European manufacturers.

Many people thought that the Arab League was formed in 1945 with the aim of strengthening ties among member states and, therefore, could coordinate their policies and protect their common interests. But what were the achievements of the League? To what extent did the League and its sister Palestinian Liberation Organization (PLO) could achieve their stated objectives?

The question is how could the Arab League and PLO, established on the basis of Arabism or Nationalism, lead to the emancipation of Palestine while the same Nationalism was used to establish Israel in the usurped Palestinian territories? Thus, there remains no doubt that the International Quds Day is the only measure that could ensure the liberation of Quds; the third holiest mosque and the first Quibble of Muslims.

Unity of Muslim nations is, in fact, the main theme of the message of Ayatollah Khomeini and the ultimate hope for the liberation of Palestine and other world oppressed people of the world. George Curzon, the British Secretary of state for foreign affairs, 1911-1921 said “we must put an end to anything which brings about Islamic unity between the sons of the Muslims. As we have already succeeded in finishing off the caliphate, so we must ensure that there will never arise again unity for the Muslims, whether it be intellectual or cultural unity”. That is the reason that the Supreme Leader of the Islamic Revolution of Iran, Ayatollah Sayed Ali Khamenei, maintains that ISIS clearly serves the American interest in the Middle East by sowing the seeds of discord and divisions in the region. This is in spite of the fact that the Holy Qur’an says: “And hold fast, all together, by the rope which Allah (stretches out for you), and be not divided among yourselves” (Chapter 3, Verse 103).

In a borderless sympathy, the International Quds Day is the day to sympathize with and support Palestinians and other oppressed people and to condemn oppression and injustice regardless of all odds. The late Imam bitterly debunked apartheid and helped Nelson Mandela in the fight against it. On the other hand, Mandela said: “the independence of South Africa was incomplete without the freedom of Palestine”. And on his first visit to Tehran after release from long imprisonment, he appreciated the fatherly role of the Imam and Iran’s historic support. Late Hugo Chavez observed the day where he would be seen at the forefront of the events among other protesters in his country.

It is imperative to acknowledge the effort by the people wishing peace to reign and justice to prevail all over the world. As emphasized by the Imam “the Quds Day is a universal day. It is not an exclusive day for Quds itself. It is a day for the oppressed to rise and stand up against the arrogant.”

The world is well aware of the continuous military and financial support of the United States of America and its allies to Israel and their incessant interference in the region disrupting the security and wellbeing of its people. This exposes the lies of the so-called developed nations who claim leading positions in the protection and promotion of fundamental human rights across the world. What a double stand!

Let us not forget that Israel was created by terrorism and has been continuously resorting to terrorism and oppression for its survival.

While sympathizing with the Palestinians on this day, all justice-seeking and concerned individuals and organizations condemn the unending brutalities and atrocities against the people of Palestinian and Yemen on International Quds Day.