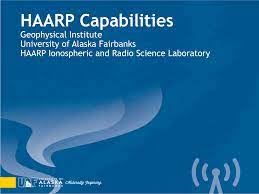 The abbreviation of HAARP is High-Frequency Active Auroral Research Program. This field of research was based upon ionosphere. Ionosphere is the area where ions remain active hence modes of communication like radio waves and mobile signals work. Without ionosphere, these technologies have no medium to work through a proper channel.

The major purpose of HAARP was to control the frequency and weather technology of the world. The location of this technological plant is in Gakona, Alaska. The construction of HAARP started in 1993.

HAARP claims that this plant is for the betterment of earth by studying weather, atmosphere and ionosphere. But the conspiracy theorists say that the purpose behind the creation of HAARP is to control and alter the atmosphere by using wrong patterns. By controlling atmosphere means to alter the weather system by using this technology.

Initially, HAARP was under military control as a project of Americans. The International Relations and Defense Committee was confirming that HAARP could literally manipulate the earth atmosphere and earthquakes.

By using this technology, the technologists can bring artificial rain. United Nations has also stamped HAARP as an illegal weapon and says that through this technology any country can cause dangerous events anywhere in the world. But as America is a leader of UN, so the conspiracy theorists say that this decision has no huge impact on Americans to stop activities at this plant.

According to the theorists, HAARP can create focusing beams in the ionosphere in to change the climate. This change will further bring changes in the ions through which an activity can be initiated.

Continuous beaming on ionosphere makes a part of ionosphere super warm. By doing this, an atmospheric change might be caused at that part of the world that could further create rains, storms or other environmental changes. By setting the frequency, these beams can produce beneficial results as well by causing climate change for another country. For example, if America sets a target on ionosphere and on that particular angle another country like japan is located. America can set some other frequency to produce positive results for Japan.

With the help of this technology, earthquakes can also be felt in the surroundings of a particular place by putting a continuous frequency in a wave length.

HAARP claims that in Africa there is less water, so by using this plant they can create artificial rains in Africa to make this land pure. But one negative element of HAARP is that according to conspiracy theorists HAARP can manipulate human brain by swinging its radiations.

This technology was funded by the US military not the government. In 2015, the project of HAARP was closed suddenly. But the conspiracy theorists, say that it was not a shutdown of HAARP rather it has been moved to a secret location.

HAARP can modify the frequency of any mode of communication up to zero in any specific area as said by Dr. Bernard Eastland who is the creator of HAARP. HAARP is also called as secret weather weapon of the world for upcoming dangerous future war events.