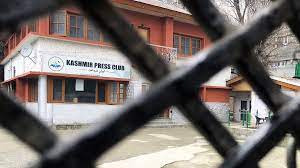 While independent and investigative journalism is taken as an essential part of a pluralistic society the world over, working in this field in the Indian Occupied Jammu & Kashmir (IOJK) immediately comes up with the thoughts of ending up behind bars because of the draconian laws imposed to strangulate every dissenting voice.

After abrogation of Article 370 and 35A in August 2019 by the BJP government, nearly eight million Kashmiris had no access to any reliable information source. With a tight control over the flow of information, the Indian government is systematically engaged in the harassment of   journalists on the ground, summoning or raiding over two dozen of them since August 5 to create an environment of fear and intimidation.  .

India introduced a Revised Media Policy in 2020 in Kashmir which authorized the local officials to declare any news or social media post as fake or anti-national. The Hindu’s correspondent Peerzada Ashiq, Indian Express correspondent Basharat Masood, Hakeem Irfan of the Economic Times, and Outlook correspondent Naseer Ganai were soon thereafter summoned and questioned about their stories and social media posts. The accusations leveled against them were all baseless and essentially meant to harass and intimidate them. Similarly, the Indian Authorities imposed the Unlawful Activities Prevention Act (UAPA) against Masrat Zahra and Gowhar Geelani after declaring their social media posts Anti-national. Another leading journalist Qazi Shibli, the editor of “The Kashmiriyat”, was detained in Uttar Pradesh’s Bareilly Jail, under the draconian Public Safety Act, and was released on April 13, 2020, after nine months. Asif Sultan, a journalist working with Kashmir Narrator has been in prison since August 2019 on charges of supporting terror activities after he reported on a slain militant in his magazine.

Another assault was carried out by the occupation forces on four journalists Hilal Mir, Abbas Shah, Azhar Qadri and Shoukat Motta on September 9, 2021. Police raided their homes and seized documents and electronic devices, including cellphones and laptops, of these journalists and their spouses and summoned them later to the local police station for inquiry. This act was strongly condemned by Committee to Protect Journalists’ Asia program coordinator Steven Butler in a statement, warning, “the repeated harassment of journalists in Indian-controlled Jammu and Kashmir needs to stop immediately. Police should halt any interrogations of and investigations and return all electronic devices seized from the journalists’ homes”. Different media organizations such as the Editors Guild and even the Press Club of India, have repeatedly called for an end to the harassment of journalists, calling it a blatant attack on press freedom.

In June last year, the United Nations special reporter on freedom of expression and the Working Group on Arbitrary Detention wrote to the Indian Government, expressing concerns over arbitrary detention and intimidation of journalists covering the situation in Jammu and Kashmir. He expressed special concern over the detention of Qazi Shibli, Sajar Gul, Auqib Javed and Fahad Shah and closure of the outspoken newspaper Kashmir Times in October 2020. The letter said that these violations “may be part of a broader pattern of silencing of independent reporting in Jammu and Kashmir, which in turn may ultimately deter other journalists and civil society more broadly from reporting on issues of public interests and human rights in the region.”

The space for press freedom has drastically reduced with the rise in harassment, intimidation of journalists, and increased state surveillance. Most of the local newspapers and media networks have been brought to the heel. Greater Kashmir, Daily Chattan, and Rising Kashmir that were once the famous newspapers of Kashmir are largely not covering critical issues such as gross human rights violations and the absence of political space for the dissenting voices in IOJK. These newspapers merely report on the social and economic woes of the people and are coerced to eulogize the India actions in Kashmir.

Right after the beginning of new year, Police in IOJK booked a journalist Sajad Gul under PSA for posting a video of a protest at home of a rebel killed in a gunfight with Indian forces. In another move, the Indian Government took over Srinagar Press club in January, 2022 citing an “emergent law and order situation” which was strongly opposed by journalist community as press club was the only place left to gather and share their story ideas.

On 4th February, 2022 ,Fahad Shah, editor of “The Kashmir Walla” was arrested on charges of “uploading anti-national content” that again showed the utter disregard of Indian Government for press freedom. Fahad Shah who is also a winner of Human Rights press award, had repeatedly questioned the authorities on staged fake encounters in Kashmir Valley and interviewed the families of innocent civilians who demanded the return of dead bodies of their loved ones.

Journalists are not the only ones gagged in the name of security but civilians at large are also interrogated and tortured by Cyber Police for their posts on social media. IOJK is witnessing a crackdown on social media users as a part of an ongoing censorship campaign. The people of IOJK have already suffered from the longest Internet siege in the world after August 5th, 2019. The Jammu-Kashmir Coalition of Civil Society (JKCSS) termed the internet blackout imposed by the GOI a “Collective punishment” in a report released in 2020. “The multi-faceted and targeted denial of digital rights is a systemic form of discrimination, digital repression and collective punishment for the residents of the region, particularly in light of India’s long history of political repression and atrocities,” the report, titled “Kashmir’s Internet Siege”, said.

The right of free speech and freedom to use media for expressing one’s thoughts are being curbed by the continuous online surveillance exercised by the authorities. Police complaints have been registered against several social media activists and civil society members. Indian authorities were strongly criticized by the Human Rights Watch  last year, for using politically motivated allegations of financial irregularities and criminal cases to silence human rights activists, journalists, and critics of the government.

Extrajudicial killings, torture, harassment, and denial of basic human rights for the past seven decades have heightened the precarity of life of the people of Kashmir who are still seeking the right of self-determination to determine their destiny.

The writer is associated with the Centre for Peace, Development and Reforms (CPDR).

He can be reached at [email protected]