2nd wave of COVID-19: ‘Educational institutes are not being closed’
National

2nd wave of COVID-19: ‘Educational institutes are not being closed’ 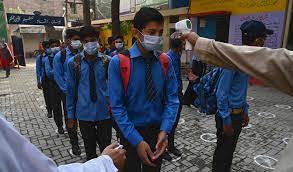 Federal Minister for Education Shafqat Mahmood clarified on Monday that schools in the country were not being closed due to the second wave of the corona virus.

On Monday evening, Shafqat Mahmood took to his twitter handle to clarify that schools were not being closed due to the surge in corona cases in the country.

Earlier, it was being rumored across the country that the government might go for the closure of schools in the wake of an increase of in coronavirus cases.

Shafqat Mahmood wrote, “Rumours again afloat regarding schools’ closure. It is again clarified that educational institutions are NOT being closed. We will continue to monitor the situation as health of the students, teachers and staff is very important but at the moment no such decision has been made.”

Higher Education Commission (HEC) has also been active in refuting false notices and claims regarding the number of students allowed at the university campuses.

Recently, a circular claiming to be from HEC was being shared at social media platforms in which it was mentioned that the universities would be allowing only 30% students to attend the classes on campus while rest of the 70% would be studying online.

The HEC has termed that notification as false and asked the teachers and students not to pay heed to such fake notices.

The HEC has also clarified that only district administrations were made authorized to close down a university campus or limit the university attendance if there is an outbreak of coronavirus at that particular campus.

It was rumoured last week as well that the universities across the country were being closed due to a surge in the corona cases but it was also clarified by the HEC that no such decision was made in that regard.