NCOC extends closure of educational institutes till May 23
Featured National

NCOC extends closure of educational institutes till May 23 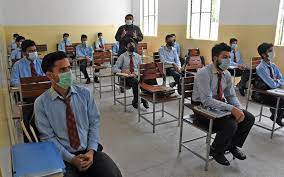 The National Command and Operation Center (NCOC) has decided to keep all the educational institutions in the country closed till May 23, 2021.

The NCOC decided about the closure of the educational institutions in its meeting on Saturday (today).

Explaining the reason behind the recent restrictions put into effect by the Centre, Federal Minister for Planning, Development and Special Initiatives Asad Umar, who is also the chief of the NCOC, said that the government realises restrictions put into place from today till May 16 are going to cause inconvenience. However, he added that they have been necessitated by the “extremely dangerous situation” created in the region with the spread of virulent mutations of the virus.

“The unfortunate catastrophe unfolding in India has grabbed global headlines. Yesterday there were more than 4 lakh (0.4 million) cases in India with 4,194 deaths. Hospital systems have been overwhelmed and oxygen supply run [running] out in many places,” Umar said in a series of tweets.

As per a tweet by the NCOC, it was decided to keep the educational institutions closed till 23rd of the ongoing month due to an unusual surge in the cases of COVID-19.

It further stated that another meeting will be held on 18th of May to review the decision about the closure of the educational institutes.