All about ethnic cleansing of Muslims in China
Blogs Featured

All about ethnic cleansing of Muslims in China 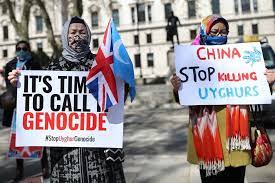 The groups of international human rights are criticizing China for doing Ethnical cleansing of Muslims known as Uyghur people living in the region of Xingjian. All daily News sites tell about the right of Muslims in the whole world. Some international organizations are also claiming that this ongoing issue is called the “Uyghur genocide”.

The region of Xingjian is mostly populated by the Muslim population and the majority of the people are Uyghur’s among them. After World War 2 and the Holocaust, the Uyghur genocide and the Ethnical cleansing of Muslims of minorities have been ranked on the top scale in the People’s Republic of China. The Uyghur genocide is also a part of the Xingjian conflict and, in this context, the holy places of Muslims like Mosques have also been damaged badly.

Background details: The Uyghur community consists of 12 million Uyghur people with the majority of Muslims. Xingjian is located on the north-western side of China. The Uyghur and Muslims are living there. The word XUAR which is commonly used for the region is the abbreviation of “Xingjian Uyghur Autonomous Region”. The Uyghur community is similar to Turkish and they have their own language. According to the ethical perspectives, the culture of Uyghur is close to the Central Asian States. The Uyghur’s culture and their lives are not secure due to the mass migration of Chinese in the Xingjian region.

Xingjian (XUAR): The region of Xingjian is included in the biggest regions of China. The governmental system of Xingjian is based on self-governance. Practically, they face many problems and restrictions in their policy system by the Central government of China. Xingjian is a desert area. Like the Central Asian States, Xingjian is full of natural resources such as oil and natural gas while their cotton production is the fifth-largest cotton production house in the world. The Uyghurs claim that they were an independent state in the early years of the 20th century but, in 1949, the region was fully controlled by the Chinese Communist Party.

Crackdown in Xingjian: From the 1990s, the movement of separatism is arising in Xingjian, and the region is fully surrounded by violent issues. The area of Xingjian is under the control of police and armed forces while cameras are installed to scan and everything happening in the region. Fighting for freedom, a lot of people have died so far while the crackdown opposed on them has affected their livelihood badly.

Criticism and allegations against China: The international sovereign states including the US, Germany, Canada, and Netherland have criticized China for committing ethnic cleansing of Muslims. The allegations against China include that they are sending the Chinese majority to the Xingjian region. They are abusing human rights badly by separating the children of Uyghurs from their families. The government of China is suppressing the birth rate to decrease the population rate in Xingjian. The USA has also said that China is practicing crimes against humanity. The United Nations daily News has accused China by saying that the people of Xingjian are living in counter-extremism centers. The people of the Uyghur community especially Muslims are facing mental and physical torture by China as they have deployed special camps in Xingjian to punish women, children, and men by sending them to prison. Many resolutions have been passed by the international states against China to stop its brutality against Uyghurs.

China rejects Genocide:  China has rejected the genocide allegations and attacks on the Uyghur Community including Muslims majority living in the region of Xingjian. While claiming that the Uyghur Community is enjoying complete freedom in the region, the Chinese government has denied the allegation of brutal camps deployed in Xingjian. According to China, these camps are just to provide vocational trainings and to fulfill educational needs.

Pakistan-China relations: Pakistan and China are neighboring friends. Both countries have strong foreign and diplomatic relations. China and Pakistan are working on a mega project known as “CPEC(China- Pakistan Economic Corridor). As the Xingjian conflict is becoming brutal day by day and it includes the Muslim population which is being ill-treated by the Chinese government. So far, no major action, stance, or any other statement has been given by Pakistan in this regard. It seems that both Pakistan and China are just busy boosting their economies. Critics say that China is using Pakistan by joint CPEC projects to become the superpower in the world and to defeat the US in every race by enhancing it is economy and technology more and more.

It is actually a daily News critical ongoing brutal action against the Muslims and religious minorities in Xingjian, China. The whole world needs to stand and make a policy that should give relief to the Muslims and other minorities facing the brutal face of China there.