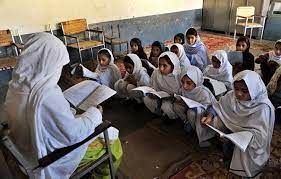 The word “education” has come from the Latin word “Educare, which means training.

Oxford Dictionary describes education as a process of receiving or giving systematic instructions especially at a school or university level. A Greek philosopher, Aristotle said, education is a process to create a sound mind in a sound body. Great Islamic Thinker Hazrat  Imam Ghazali (R.A) said that education is a process which qualifies an individual to differentiate between the true and false.

Intellectuals say that: “Education is the third eye of a man.”

Prophet Muhammad (PBUH) laid great stress on seeking knowledge. It is evident from the history that Muslims remained dominant until they were torch bearers of Knowledge and science. At that time, they were rulers in Middle East, Spain , Iran, Central Asian States and Indian subcontinent. When they became luxurious and ignorant of science and technology, they lost their glory. When British subjugated Indian subcontinent in 18th century, Lord Macaulay introduced a system of education for specific purposes. It was to prolong the British reign in India. The Muslims of India could not follow the way that was directed by the English as it was against their religion. Hence, they remained out of politics and government jobs .When Pakistan came into being on 14th of August 1947, it had a poorly educated population and there was only one institution for higher education i.e. The University of Punjab. Literacy rate was 16%. One of the first steps towards education development in Pakistan was national educational conference in 1947.

It is regretful to say that the effects of British education system are there to the present day. Our present educational system bears the imprints of the days of slavery under the British regime. It has remained an orphan child in our society by facing double standard. Unluckily, lack of political commitment for education results in low literacy rate. Economic survey of Pakistan 2016-17 depicts the gloomy picture that literacy rate has dropped by 2% in 2016-17 and the country’s literacy rate declines from 60 to 58% percent.

In Pakistan, unfortunately the people have been introduced to the double standards of education. It can be seen in the stratification of the school system for elite and poor. The one which prevails throughout the country is related to public sector and the other is an outcome of the private investors. This causes stratification among the society. It is our misfortune that remnants of colonial era are visualized in the methods which teachers and students interact in. The degrees are same but the scope of knowledge got by the two is too different to be compared. Here, students face many complications by studying under different curricula. This has created a big rift between the two sectors.

Since its inception, Pakistan has remained a weak economy of the world for it has got nothing in its assets. The conflict between India and Pakistan over Kashmir has hardly allowed our government to consider and allocate funds in budget for other sectors. Still, only 2% of GDP is allocated for the welfare of education, which is quite inappropriate to meet the demands of education.

It is mandated in the constitution of Pakistan to provide free compulsory education to all the children of 5-16 years of age. Unfortunately, no politician has paid attention in improving the standards of education. They misuse the sources of the country and thereupon create problems for the citizens of Pakistan. It is said “If you want to destroy the future of any nation, no need to wage war with them; defunct their education, they will remain no more alive on the map of the world.” Pakistan has fallen a prey to this situation.

It has been a problem of our educational system that irrelevant inductions have been coming in from various corners. Nepotism is always there while hiring the staff. Briefly speaking, expected, fruitful and lasting results cannot be achieved from wrong and irrelevant persons. Teachers often have to perform duties other than their professional assignment and it is very demeaning to the scared profession of teaching.

Existing system of examination is also one of the root causes of general malady in our educational system. Evaluation and assessment is a crucial phase in the teaching-learning process. The dynamics of education leading to the realization of specific objectives are to a large extent, directed by the evaluation mechanisms used.

Here are some suggestions to improve the prevailing system.

1. All of us should aim at pacing ahead to take the task of improving the education system in a systematic way by implementing different programmes.

2. Awareness should be created amongst the unaware fellows, the importance of education must be expounded in real terms but in an easy way, different literacy programmes should be commenced throughout the country in order to provide assistance to the poor.

3. Government should take an active eye and spend much more money for the improvement of the primary, secondary and higher education. More schools, colleges and universities, medical and engineering colleges are needed to be opened.

5. Subject relevancy must be focused in mind while induction of staff for the concerned posts. Politics must be abolished from the education department. Honesty of purpose and quality in work should be our motives.

6. Every one of us should root out the copy culture from top to bottom from the educational system that has been wearing away the fresh brains of our youth for the times unknown.

7. The education must be got for the purpose of education not for getting jobs. Text books must be updated with current topics and rapidly changing of the scenario of the world must be given in the textual books.

Last but not the least, let us work together for bringing revolutionary changes for the effective functioning of the educational system in the country. Let us pray to Allah Almighty that He may enable us to bring and get our desired results by putting our entire efforts in this respect.