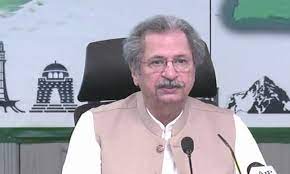 According to the details, Federal Education & Professional Training Minister Shafqat Mehmood and Special Assistant to Prime Minister on Health Dr Faisal Sultan held a press conference on Monday after the meeting of National Command and Operation Center (NCOC) in which they announced the phase-wise reopening of the educational institutions.

They further informed that, after the winter vacation, the administrative and teaching staff would be permitted to join the duty from January 11.

They also said that secondary and higher secondary students whose examinations are approaching would be allowed to resume their face-to-face classes.

They further announced that the universities and higher education institutions would recommence their classes from February 1st, 2021.

The federal minister said that the examinations scheduled in March and April would now be held in May-June to give students some extra time for preparation.

Dr Faisal Sultan said that there was a downward trend in the second wave of coronavirus cases in the country due to the timely decisions of the government.

He also said that the government was ensuring the safety of the people by implementing the standard operating procedures (SOPs) across the country.

He praised National Command and Operation Centre (NCOC) for putting serious efforts against the deadly coronavirus.

He appreciated public and private hospitals’ health workers for fighting against the COVID-19.

He urged the people to keep following the SOPs set for the prevention of the spread of coronavirus by wearing masks and keeping social distance.