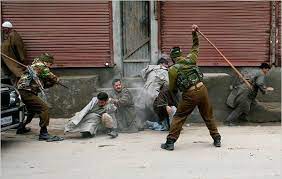 On August 5, 2019; the Indian Government revoked articles 370 and 35A. These articles granted the people of Kashmir autonomy, a constitution, and the power to make laws. Revoking these laws took the power away from the people and made the entire Constitution of India applicable to the State.

Although New Delhi has always been trying to hide human rights abuses in Indian-held Kashmir, yet could not get away from the international scrutiny. The third most powerful body of the United Nations has once again raised concerns regarding India’s decision to end Jammu and Kashmir’s autonomy in its recent report. The Special Rapporteur on minority issues and Special Rapporteur on freedom of religion in a joint report said, “The loss of autonomy and the imposition of direct rule by the Government in New Delhi suggests that the people of Jammu and Kashmir no longer have their government and have lost power to legislate or amend laws in the region to ensure the protection of their rights as minorities.”

On August 5, 2019; the Indian Government revoked articles 370 and 35A. These articles granted the people of Kashmir autonomy, a constitution, and the power to make laws. Revoking these laws took the power away from the people and made the entire Constitution of India applicable to the State. According to the UN human rights experts, the new laws could cut back or lessen the political participation of the people in the region and they may suffer discrimination in employment matters too. It further maintains; “the number of successful applicants for domicile certificates who appear to be from outside Jammu and Kashmir raise concerns as the demographic change on linguistic, religious, and ethnic basis is already underway,”. Keep in mind that this is the first report by the UNO which acknowledges the Kashmiri apprehensions about the demographic change.

Besides the UN report, a New Delhi-based organization called the ‘Forum for Human Rights in Jammu and Kashmir’ has also published a 67-page long report titled “Human Rights in Jammu and Kashmir: Mid-Term Report of Aug 2020-Jan 2021”. This is a comprehensive document which covers almost all major aspects of the prevalent situation in Kashmir, particularly in these trying times. A few excerpts of the report are below:

The media acts as an overseer to protect public interest against misconduct and creates public awareness but the people of Jammu and Kashmir have also been denied this basic right. The media is being continuously suppressed by the Government of India. Journalists are being beaten, held captive, and detained when they express their views. The right to freedom of speech has been taken away from the locals, the report acknowledges.

The human rights experts from all over the world urged the Government of India to give social, cultural, and religious rights to the people of Kashmir. If peace is to come to South Asia, the human rights violations in Jammu and Kashmir must end straightaway. Both UN experts and India Forum for Human Rights’ reports underline that India has to abide by the international conventions and obligations concerning human rights. Otherwise, it has to face international scrutiny and criticism.

The writer is a student of Public Administration and Governance at NUML University, Islamabad. She can be reached at [email protected]