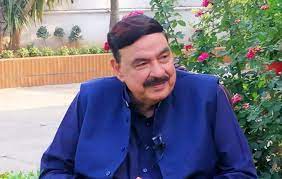 Interior Minister Sheikh Rasheed Ahmed asked the opposition parties on Tuesday to leave the assemblies immediately and go on a long march on December 25.

While talking to the journalists, he said that the government of Pakistan Tehreek e Insaf (PTI) had into power in a democratic way under the truthful headship of Imran Khan.

He said that any public gathering or long march by Pakistan Democratic Movement (PDM) could never damage the government.

He also suggested the PDM leaders not to involve the national institutions in any political rift for their political benefits as it did not reflect decency in any way.

He made it clear to all that Prime Minster Imran Khan had a very clear stance that he would never grant any national reconciliation order (NRO) to anybody involved in the cases of corruption and money laundering.

He also said that Imran Khan would rather opt for quitting the government than giving any NRO to corrupt politicians.

He said that he was not in favour of the opposition parties openly targeting the institutions and discouraged their approach.

Responding to a question about Bilawal Bhutto Zardari, he said that Bilawal was trying to manage some room in Punjab for the next elections as Pakistan People’s Party had lost Punjab long ago.

The government would never be blackmailed by the false schemes of the PDM leadership, he said adding that it would complete its 5-year tenure by serving the country and the nation.

It is important to note that Sheikh Rasheed Ahmad has recently been appointed as interior minister and the apparent reason behind this appointment is that the government wants him to respond to the PDM factor in a more appropriate way.